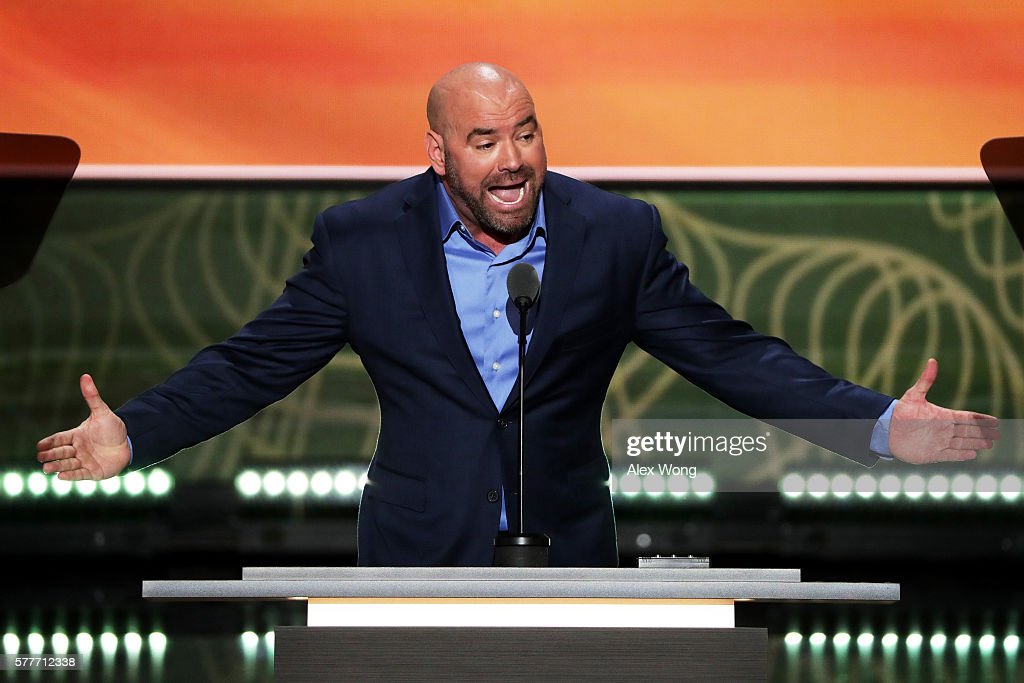 na White, the president of the Ultimate Fighting Championship, is not an athlete, but he works in athletics.  He is not involved in politics, but yesterday he spoke at the Republican National Convention.  And Dana White doesn’t have a brain injury, but he makes sure other people do… And it’s with the help of Donald Trump that he can do this all.

In a 4 minute speech, White used the knowledge he acquired from acting as a Mixed Martial Arts (MMA) promoter, to promote Trump for President.  He describes Trump as his friend, noting that, “Just for the record [he] has nothing to do with my business.”  (To counter that statement, know that the first 2 UFC fights were fought at the Trump Taj Majal, and Trump continues to host UFC events at his Atlantic City casino.)  He then goes into Trump’s three characteristics that will make him a great President.*

When UFC fighting first came out, in 1993, it was considered a blood-sport.  The description of the sport is not simply rhetoric, as, after time in the ring, fighters drip with blood.  Last year, Wanderlei Silva, a former fighter, claimed that the UFC fixes its games.  (World Wrestling Entertainment, Inc. admits to fixing their games.)  However, if we accept the games as being fixed, that doesn’t make them any safer.  For example, the comparatively tamer World Wrestling Entertainment is being sued by more than 50 former fighters for the brain trauma they suffered in the sport.  Since the sport is essentially “fake”, being scripted and choreographed, the WWE is “directly responsible for wrestlers’ injuries”, according to the lawsuit.

According to a study in the American Journal of Sports Medicine, about one-third of professional MMA matches end in knockout, indicating a higher incidence of brain trauma than boxing or other martial arts.  “The researchers [of this study] at the University of Toronto proposed introducing rules like in boxing where a fighter gets a 10-second count and evaluated after a knockdown. They also proposed more training to help referees to identify fighters who are defenseless or have lost consciousness so they can stop fights more quickly.”  This year, the UFC extended its partnership with the Cleveland Clinic in the “Professional Fighters Brain Health Study”.

Yes, the UFC is trying to better its sport, to prevent head injury thereby allowing athletes to stay in the sport longer.  Technically, Trump is supporting this investigation.  However, do you think that the man who likes to see head collisions in football wants to make the UFC safer?  Will the sport continue to be as popular if its rings are not filled with blood after a fight, thereby decreasing his game sales?  Assuming the UFC is here to stay, Trump needs to think about his point of view.  It’s one thing to except that a sport is going to happen, it’s a whole other thing to give it a place to happen.

(Currently, in combat sports, there is a call from some for fighters to toss away their gloves and fight bare-handed.  That call sounds awful and horribly unsafe, and would increase hand injuries.  For the head, bare-handed fighting is actually safer (safer, not safe).)

*First, White says that Trump has excellent business instincts, presumably talking about his instincts with the UFC – even though, as White said, “[Trump] has nothing to do with it.”  Second, Trump is a hard worker.  Third, Trump is a loyal, supportive friend.  Being a good friend is a great feature, but I’m not sure how it applies to the presidency, though there was talk about Trump buddying up with Putin.